In 2010  the Brazilians Patricia and Vinicius sold all property in Rio and went to travel the world. For six years, the guys have visited 65 countries, but made themselves a promise: they are not tourists and see the sights isn’t really important for them. Their main interest is to  live in Japan, as the Japanese, in France, as the French, in Chile, as the Chileans — in other words, work, keep the house and go out with friends on weekend. They arrived in Belarus on January 15, rented an apartment in the Kamennaya Gorka and now they try  to understande what it means to be a Minsk resident.

He is a programmer, she is a wedding photographer. They are already 15 years together. They decided to change the Brazilian address on global  one in Argentina. They came for a few days in Buenos Aires, imbued with the spirit of  the city and wanted to stay there.

“I can work remotely, the main thing ‒ the computer and the internet, but Patricia shooting were scheduled six months ahead, so I had to go back and wait,” Vinicius remembered how it began. “By the end of 2010, we finished  with everything and decided to move. First, we wanted to move things along, but  then considered that it was very expensive, and sold everything. Generally, the material world is not important for us. The main thing is we have each other, and we have laptops, a camera and the Internet.”

The guys travel as follow: initially choose a continent for a year and then they determine what countries on the continent to visit. So is cheaper – the saving on flights, it is easier to think through the logistics.

Eurasia  is in queue now.  The current trip started in October 2016. First France, Poland and Belarus now. They are for three months in  this country.  Brazilians are allowed to stay for 90 only  without a visa.

“We don´t really know about Belarus, and probably never would have come here, but we met a guy in Krakow, who just stayed for you. He really liked it,” Vinicius continued. “We are inspired, and then in November 2017,  visa-free regime between the two countries have established. This determined the further way.”

“The Belarusians and the Brazilians are very similar. They like to visit and to eat”

In our country the Brazilians went through Brest, and were a little worried.

“And then the train at the Belarusian-Polish border, I passed my passport to the border guard and said: “Hello,” and suddenly he starts to sing “Is it me you’re looking for? I can see it in your eyes”(the Lionel Richie´s song “Hello”, editor’s note), singing, Patricia  says smiling.

“And, he sing well, in fluent English,”  Vinicius continued, “We breathed with relief.” This same good mood is felt inside the country.

“Is it really?! They say the Belarusians almost don’t smile.”

“Yes, you walk down the street, people are serious around, but after the first “hello” changes everything,” argues Vinicius, “We have noticed, in London, if you push someone on the subway  they immediately apologize.” People in England are very polite, but reserved. The Belarusians may not apologize on the subway, but they are easy to find a common language. They go far in friendship.

The guys remember: before start out for Belarus, they wrote on the Couch Surfing website something like: “Hi, we will  be there soon.” This minute there was three persons ready to show them Minsk. They spend the weekend with new friends: all call somewhere.

“The Belarusians and the Brazilians are very similar ‒  family people who love to visit and to eat,”  Patricia continues, “Recently we were invited to a concert of folk dances. After the performance, people sat at the feast table. And all turned to us: “Eat this, try that,” they thought we were very hungry. In general, the same like in Brazil.

“Is it true that you can᾽t take pictures of the Lenin monuments?”

In Minsk, the family settled in the nine-floor building in Kamennaya Gorka. In the afternoon during the week their life is just normal. Vinicius works on the Brazilian IT-company, and Patricia edits commercials for their YouTube-channel. 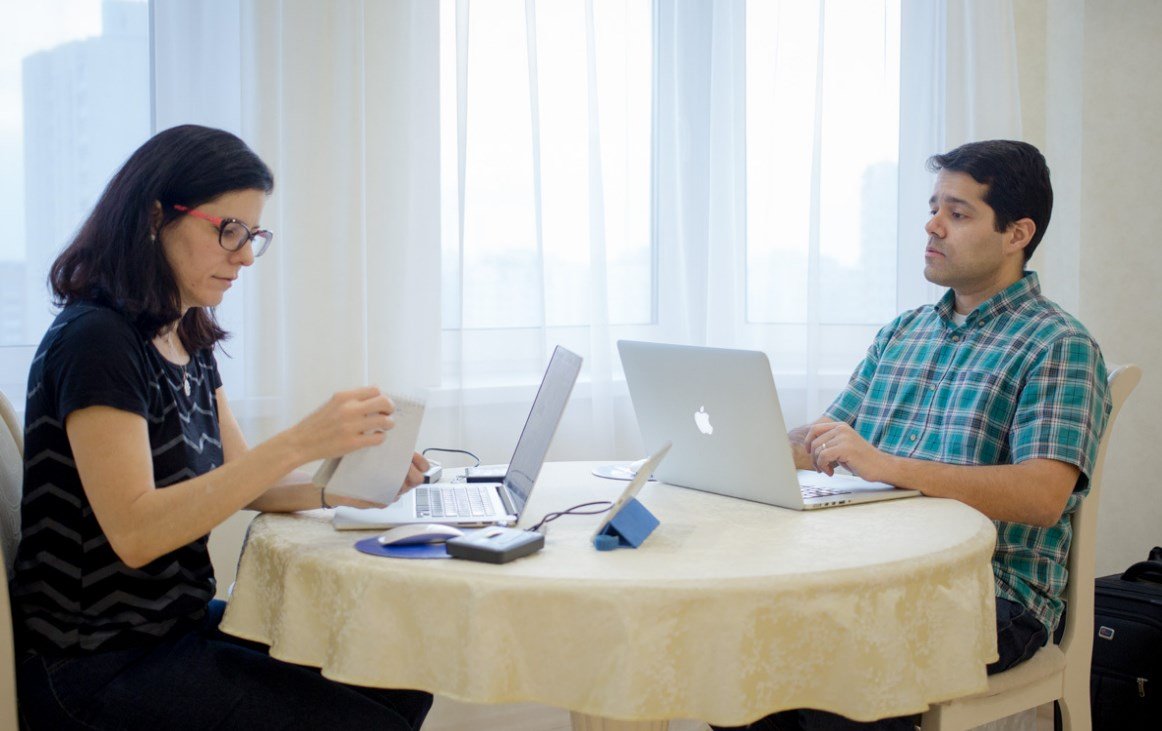 And as a housewife, she goes shopping. And that’s what  surprised her– there are very few  vegetables on the shelves. It is difficult, for example, to find lettuce, arugula or spinach.

– “And potatoes,” lists the companion.
– “Potatoes?”
– “Yes, the sweet potatoes.” (batata. — editor’s note)  “It is being cooked the same way as usual popato, only it is tastier and you won’t get fat.”
– “But what do you think about food prices, in general?”
– “It is inexpensive.”
– “Really?”
– “Have you been to Brazil? After Rio everything is cheap here,” Patricia smiles, “There is, for example, the average price tag for the rental of one-room apartment in Rio is 1200 Euros per month.” Bus fare more expensive about in the four times and on the subway in the five times.

What else guys like is ice on rivers and lakes. Before this, they have never in a life stood on the frozen water among the pond. For the sake of this, laughing, and can endure minus 16.

“We come from a country where it is always hot, and we want to chill. That is the alternative,” Vinicius flip photo in the instagram, “Yes, and the houses have a heatinga nd double-glazed windows so they keep warmth. In Italy or Portugal, where the apartments are not heated and in freezing weather  they are less comfortable. Though, perhaps if we were engaged in tourism, the weather would be a problem. But we work most of the time and so cold weather don’t interfere us.”

On weekends the couple doesn’t sit at home. Last time, for example, they went to Dudutki. Well, they don’t hide that they were with the Belarusian friends. Otherwise be tight: from the staff of the complex no one spoke English.

“Although, if you do not know how to say anything, the body language is usually helps. The main thing is to smile,” explains the resourceful Brazilian.

“Plenty of funny moments with the language. I’ve somehow take photos in Brest at the station and I did not yet know that this building can’t photograph,” continues Patricia, “And then I was approached me a policeman. I just didn’t understand what happened. I look at him: “Sorry” He confused. “Okay,” he said, “And gone.”

“By the way, it would be helpful if you have collected in one guide information, what in Belarus can’t be done,” share supervision Vinicius , “And the familiar scared us, if you make a picture on the subway – will be deported. They said  drinking alcohol in public places and cross the street in the wrong place are prohibited.”

“Is it true that you can’t photograph the Lenin monuments? It is not true? Well, because I took three photos, says Patricia.”

“We have six years on the road. And we haven’t reasons to stop”

In  time free from business and leisure the couple reads local news. Of those that surprised them: “Belarus cancels visas for residents from 80 countries.” Vinicius was so impressed with the idea that even analyzed why should foreigners come to Belarus. As a “digit head”, he wrote everything point by point:

“People always think they can offer less than it actually are,” – they share their opinion. “You have, for example, the large Soviet heritage as architecture and a metro. Even in Russia there is no such thing. But it is also interesting. It is interesting to see a part of history, which disappeared very recently.”

In general, the Brazilians like be in Belarus, but  they don’t plan to stay here for a long time. And a question is not only about visas. Three months, say, it’s enough to feel the place.

“I tried and but I still  need to move on, because of boredome,” shrugs Vinicius. “I think this style of life – this is the future, because more and more people can work remotely.”

“People want to live at home rather than out of a suitcase.”

“And we have a house too,” Patricia disagrees, “We’re not moving every day. If you live in the country during two months, you can make a total of six trips per year. In addition, we rent apartments rather than a hotel. And there is an apartment and work – there is a feeling of home.”

“In Argentina, I read a unique phrase, ′Life is like a book, people who don’t travel, always stay on the first page.′” At that moment I was completely turned around. “I shared with Patricia – and here we are six years on the road. And we haven’t reasons to stop” 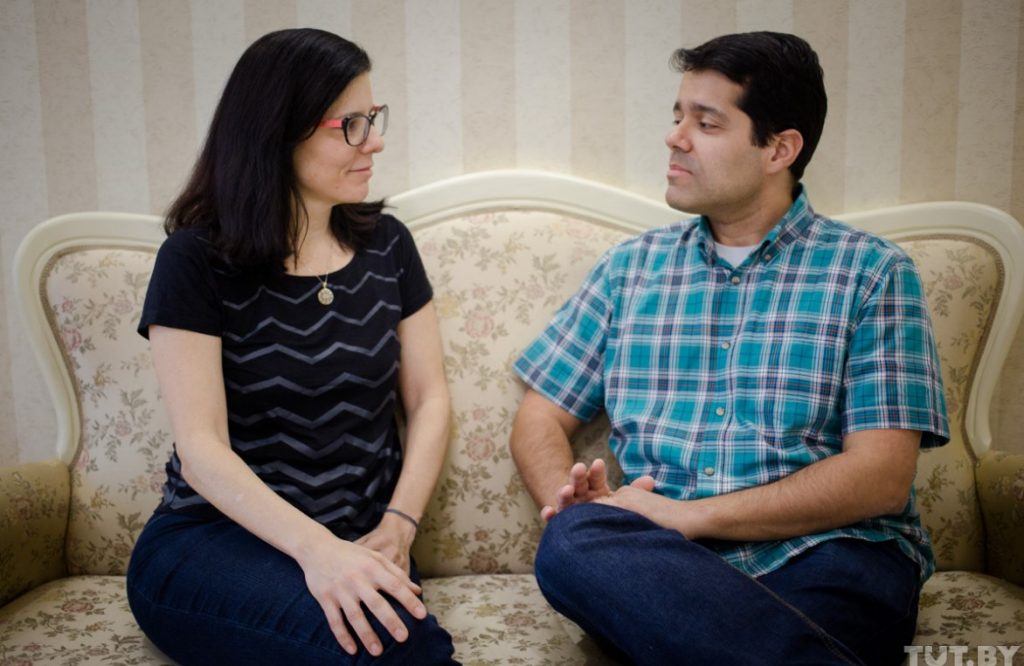 Original text was published by TUT.by