An American bascetball player Reichel Teriot was very successful sportswoman in the USA but last year she injured her left leg and had surgery. Doctors didn’t make any predictions about her ability to play at NBA level.

– After that I begun considering all offers including Romania and Belarus. Surely, my family and especially my mom were worried about such a long trip. But everyone told to me that I must follow my dream. I hadn’t searched information about Belarus before I came here. I just asked my college friend because she visited Minsk. She said that Belarus is an ordinary, normal  country.

She has been living in Minsk within 6 months and now she can say that among Belarus and USA there are more differences than similarities.

– Frankly speaking, Belarus crucially differs from the USA. Belarus and USA – day and night. It’s difficult to say what exactly is different. I have had to get used to everything: supermarkets, food, other cars in the street, lack of usual brands in shops. When I came in Minsk I thought not about new country or mentality but about my first moving for a very long time. I came not just in other country but in other part of the world. Some years ago I have been travelling to Australia with college team. But in Belarus I had to go alone. Belarus opened for me Europe – I have never been to Old World countries.

‘Only uneducated people think that Europe is one big country’

Basketball player says that for many Americans travelling to Europe is a real dream.

– My friends want to see Europe. I wouldn’t say that they want to travel in Belarus because they think that Europe is something common. Perhaps, only uneducated people think that Europe is one big country although majority of Americans know only the largest European countries: Great Britain, Germany and France. They don’t know where Belarus is. I say my friends: ‘Well, guys, just  ask Google!’ My parents are interested in country where I live. But I don’t think that they come in Belarus. They have to work and travelling to Belarus can take a lot of time.

Reichel rents a flat in Minsk. She says that the most difficult thing is to get used to Belarusian products.

I live near ‘Traknornyi zavod’ station. It is not far away from our ‘Minsk-2006’ arena. My club suggested me that variant but to live in the hotel would be much easier for me. I try to cook but it’s still a problem as Belarusian products are different. People criticize the Americans for their addiction to fast food. Personally, I’m not a fan of such food although sometimes I choose McDonalds when I want to save my time. That kind of food is cheap so it is so popular. Surely you can’t eat only fast food as it can lead to problems with your health. But once a week it is a good idea. I like Mexican cuisine but sometimes it’s difficult to find right ingredients. After Christmas I brought from home set of sauces and spices which I have never seen in Minsk. It’s a bit complicated to navigate in Belarusian goods because of another packing: sometimes I can’t differ milk from sour cream. 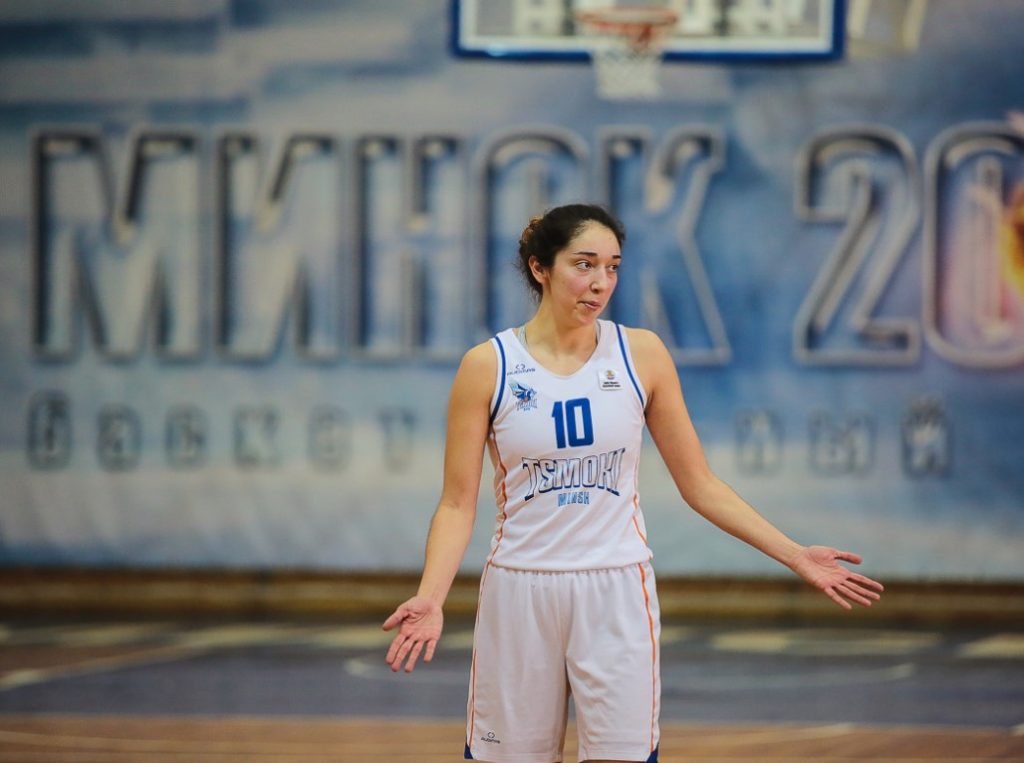 I don’t understand who the best producer is and who the worst is. Thus I taste everything through trial and error. Once I bought milk chocolate, as it turns out, I didn’t see inscription on packaging ‘chocolate with milk taste’. I hate coffee so chocolate made me unhappy. Sometimes I feel disappointed when see salads with a big number of ingredients. The food prices are also different: American lunch costs about $17, Belarusian – $3-4. That is lunch in my native Ohio is 5 times more expensive than in Minsk. It doesn’t make sense to compare Belarusian and American prices. Let’s say in Minsk you watch basketball for free. In the USA the college team game ticket is about $10, NBA – $50.

Reichel as majority of foreigners has difficulties with Belarusian currency.

– Prices in Belarusian shops are given with zeros and without. It is a problem. I try to use the card, but frankly speaking, some places accept cash only. In such situations I ask the sellers to count of the right amount. The biggest problem for me is a language barrier. Only two or three girls from my team speak English. Others know some words only therefore it is hard enough for me. Of course, I use translator, but not every time it can help me.

Reichel is a homebody by nature. She rarely goes out somewhere and communicates with local people. But she talks about the most unusual observations and discoveries in Minsk.

– When it was warm I went for a walk in Minsk and research surroundings. I was surprised with Oktyabrskaya Street and graffiti which made Minsk’ interior more colorful and interesting. I liked very much pictures on the walls, they remembered me street festivals. Even in twitter I published that street photo.

During my everyday walking I see that the Belarusians like wearing beautiful clothes. Your daily style differs from American. Regularly I meet girls I would like to say ‘top-models’ who wear high hills and prefer heavy make-up. Girls like dressing up. Look around: every girl has her own style. American girls don’t pay attention to appearance. The Americans wear brand jeans, t-shirts. If this is some brand collection every cloth will be similar. And in Belarus you find absolutely different clothes. I don’t understand at all where you buy them. I can’t recognize a brand you wear and where you buy it, because every person has own style. I’m not a shopaholic, so maybe, such variety of clothes is so conspicuous.

– The typical American woman is not only cool business woman from Hollywood films, but also mother and wife. Every family wishes to have a financial stability so women give up the housewife’s role. In our society there is a certain kind of endless money struggle. Personally, I don’t like it. Money can’t replace everything.

In my opinion the Belarusians are not so crazy about brands and expensive purchases. In America people buy the last models of cell phones and notebooks, everyone tries to demonstrate that he has a new device. In Minsk everything is simpler. I don’t know if it connects with the income level, but I don’t see that everyone shows uniqueness.

In the USA Reichel studied peculiarities of education and relationships in family. She says that she would like to know how it works in Belarusian families.

– The Belarusians don’t make a parade of their private life so it’s difficult to compare American and Belarusian families. Over the past 20 years in American family values has changed. I don’t know about situation in Belarus but in the USA the divorce rate rises. In big number of families there are half-brothers and half-sisters. For example, I also have one brother and two half-brothers. We always were friends with them. Exactly they opened me the sports world. Sometimes parents and children are not very close but it wasn’t for every family. For example, in my family I always felt support. It is believed that if children didn’t get enough love from their parents they could send them to retirement home. But it is not common. If children don’t have enough time to care about their parents they send them to special institutions. People understand it so nobody condemn such things.

She lives far away from home but Reichel monitors the political situation in the USA and thinks that all people need to be active participants of political life of the country.

– I don’t know much about Belarusian politics but, surely, I’m interested in my native country’s life. People still don’t understand how Donald Trump became the President. I remember when he said that he will be run for the President. But people said: ‘He jokes! It’s not going to work.’ He was like a star for people but not like serious politician. And today he is the President with support groups and army of haters. The Americans try to be active citizens and to react to what is going on in public life. I know a lot of people who monitor political situation in front of the TV but don’t go to marches and rallies. But there are people who stand up for themselves in the streets.

I like energetic people – the action generates the progress. Trump expressed a lot of bold plans but how America changes will depend not only on him but on each of citizens of that country. People don’t have to be indifferent.

Original text was published by TUT.by

French basketball Nadzhat Ordad ‘Perhaps, I would like to marry Belarusian guy.’

Nadzhat Ordad plays for BC Horizont Minsk and is native of France. As both an attractive lady and a devoted Muslim she shares her experience of living in Minsk. Read what she thinks about Belarusian men, stereotypes about Islam and why people confuses her with Shakira.

Following the results of the first quarter 2020 in mutual trade in the goods America has ousted Kazakhstan and has left Turkey behind. Besides, USA became the only country with positive dynamics of commodity turnover. One more important news: for the first time in history China, not Russia, became the main source of the Belarusian negative balance.

Head of the U.S. Embassy Jennifer Moore on U.S. visas, Kremlin influence and elections in Belarus

Since Karen Stewart left that post in March 2008, the U.S. diplomatic mission to Belarus has been head by a Chargé d’Affaires. For a little over a year, Jenifer Moore has been working in this position, representing the U.S. government and its interests here. Now she speaks about the expected arrival of a new ambassador, the high cost of American visas, what she expects from Belarusian parliamentary elections, and what she does in addition to her work.