It is 5.30am in southern Belarus. A pink moon hangs over flat fields tinged with frost, and as we arrive at the checkpoint on the edge of the Chernobyl Exclusion Zone, five hours’ drive south of the capital, Minsk, a dawn chorus of cranes and hoopoes is in full swing.

This may seem an unlikely place to come wildlife watching, but I’m here with the first eco-tour of the Palieski state radioecological reserve (as the Belarusian section of the zone is called). 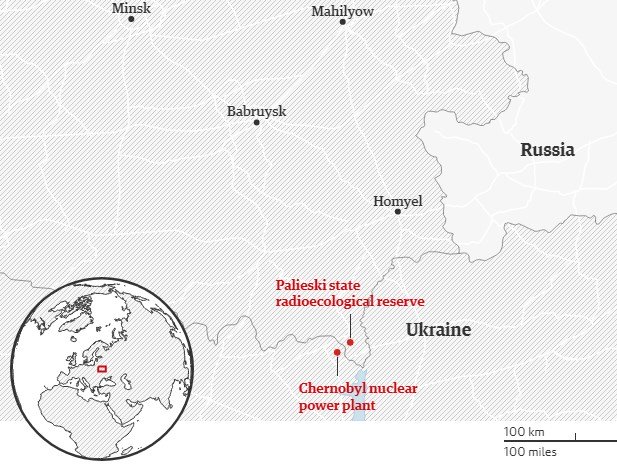 It was in April 1986 that probably the world’s worst nuclear accident happened, just over the border in northern Ukraine – a dramatisation of the disaster is currently showing on Sky Atlantic. Chernobyl town was evacuated and the exclusion zone today covers 2,600 sq km in Ukraine and 2,100 sq km in Belarus.

Ukraine turned its part of the zone into a tourist attraction several years ago – 50,000 people visited the nuclear reactor and ghost town of Pripyat last year, and it has even hosted a rave. But Belarus didn’t open its Palieski reserve to visitors until last December.

The Ukrainian site is now popular for its eerie ghost town and reactor ruins, but on this side of the border it’s all about the wilderness, and our tour will be a nature-watching trip like no other. The reserve claims to be Europe’s largest experiment in rewilding, and the unlikely beneficiaries of nuclear disaster have been the wolves, bison and bears that now roam the depopulated landscape, and the 231 (of the country’s 334) bird species that can also be found here.

After an initial hitch with our paperwork (few things are bureaucracy-free in Belarus, though new relaxed visa requirements mean Brits are now spared a trip to the embassy near Kensington Gardens), we meet our guide Valery Yurko, a spry ornithologist. Our visit is limited to seven hours, and I am keen to see as much as possible.

We start in the museum – which has some memorably bad taxidermy – before setting off to try to spot the real things. Elk are the most common mammal here, and it doesn’t take us long to see a young male standing with legs half-buried in a patch of swamp.

As we continue along a forest track that was once the main road to the Ukrainian capital Kiev, Yurko says there’s a 50-50 chance we’ll see a wolf. There are around a hundred of these carnivores in the park and as hunting is banned here, the animals are slowly losing their fear of humans. 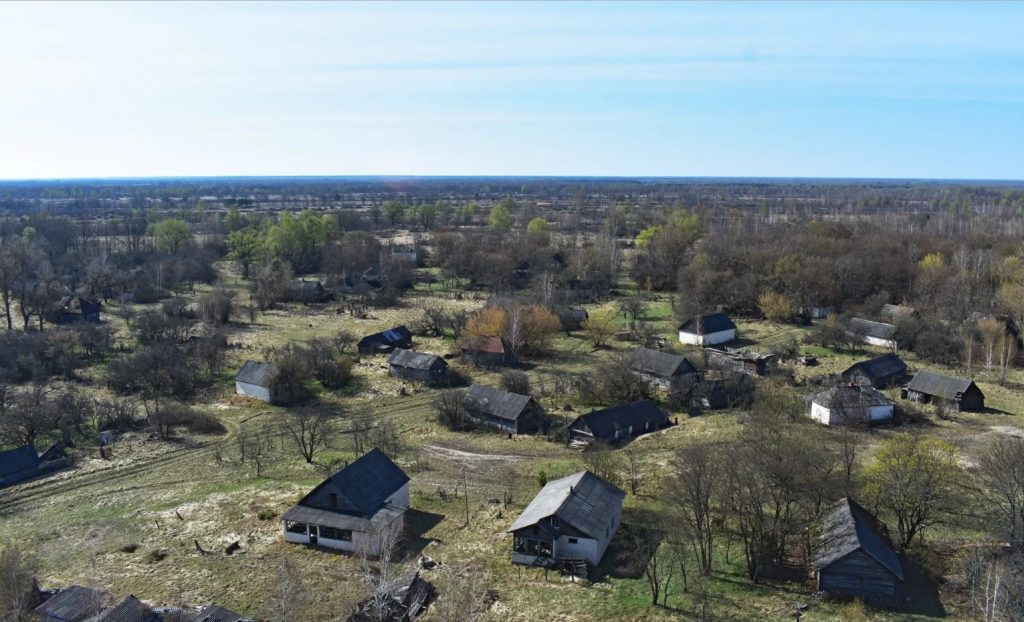 We stop at a Soviet observation tower in the middle of the reserve. The pylon-like structure, 30 metres tall, would be a personal hell for vertigo sufferers, with its bent metal rungs and tiny platform of sun-cracked boards. The climb tests my usually reliable head for heights, but is worth the effort.

From the top we can see the hulking metal sarcophagus covering the blown reactor at Chernobyl, and get a panoramic view over the villages of the exclusion zone, which are now all but swallowed by vegetation.

The previous day I’d visited one of the reserve’s abandoned settlements, Droniki. When the village’s 232 inhabitants were evacuated, they didn’t have long to pack, and the floors of the wooden houses are still scattered with shoes, cigarette boxes and children’s jotters dated April 1986. It’s a poignant sight: nature may be benefiting, but that came at great cost for the people evacuated from the zone (nearly 350,000 in total), and the millions who have fallen sick or are considered to be “contaminated” by the accident.

The greatest writer on Chernobyl, investigative journalist and Nobel prize-winner Svetlana Alexievich, wrote in her 1997 book, Chernobyl Prayer, that she was “recording the future”. Among Droniki’s crumbling walls and sagging roofs, collapsed fences and barns filled with a mouldering harvest – and in the wider reserve – we see a flash forward to a world without people.

We see the familiar creatures of town and farmland dwindling, and animals long since pushed to the wild edges of Europe taking their place: the sparrows, rooks and white storks are giving way to white-tailed eagles, lynx and wolves.

And the radiation? Yurko tells me the level I am exposed to during this visit is less than I’d get on a transatlantic flight – but what about the animals that live and feed here?

It is a contested issue among scientists. Some research has found troubling signs of fallout-related disease and mutation, but another study recorded large populations of mammals in the zone. We don’t yet have the full picture, according to Viktar Fenchuk, project manager for the Wilderness Conservation Program in Belarus, and one of the country’s most senior conservationists. The reserve “could be an ecological ‘trap’, where animals move in […] and then develop health problems,” he tells me. “But the evidence so far is that on a population level, the effect of radiation is not visible.”

Our driver is looking pointedly at his watch. Wolves have eluded us, and we’ve only seen the hoof prints of wild Przewalski’s horses and the distant throbbing sound of a black grouse courtship, known as “lekking” (to see the birds up close, you apparently need to be in position by 4am). But we do spy one of the park’s rarest birds, the greater spotted eagle. These raptors are particularly shy of humans, and the Palieski reserve is the only place in Belarus where their numbers are rising.

Valery Dombrovskiy, a world expert on the species, has silvering hair and the beatific look of someone in love with his work. Joining our group, he explains that these scrubby fields are not the eagles’ typical habitat; they usually favour marshland.

“But,” he says, “I’m starting to wonder if it’s the other way round, and they adapted to wet areas to avoid people.”

We spot an eagle high above the plain, performing a display flight (advertising its ownership of a territory) as we watch through binoculars. It swoops and soars, then, seemingly for sheer joy, tucks its wings into a “stoop” to drop like a falling star into the blue. It’s a final moment of awe: my seven hours are up.

• The trip was provided by APB-Birdlife Belarus, which runs eco-tours all over the country. A two-day tour to the Chernobyl “accidental wildlife sanctuary”, including two seven-hour visits, guide, meals, transfer from Minsk and accommodation in Chojnicki town, costs £470pp, based on a group of four